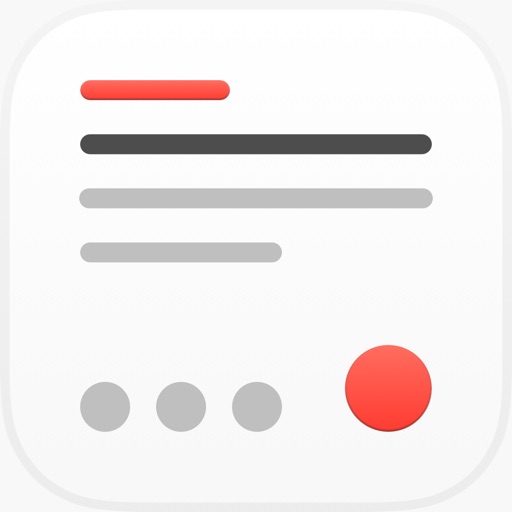 Additionally:
• Updated location iconography to be more consistent.
• Updated the order of some options in settings.

• Fixed a bug where the selected location wouldn't save properly if you were using 'date only' mode.

Version 4.0.1 brings a handful of tweaks and bug fixes.

• Updated the app name that’s shown on the Home Screen so it no longer feels cramped.
• “Date only” reminders set for today should no longer immediately generate a notification. Let me know if you preferred the previous behaviour here; I may consider introducing this as an option.
• Updated the ‘detected’ dates button to work with 'date only' mode, and it now matches the colour scheme of the 4.0 update.
• Fixed a bug where selecting a ‘detected’ date wouldn’t remove the appropriate text from the reminder title.
• Fixed a bug that cause the app to forget when icons were purchased, meaning you get to keep hitting ‘restore purchases’ to get access to them again. Sorry about that!
• Attempted to fix a crash on launch that can be caused by having no default list set for Reminders. It’s hard to know for sure that’s it’s fixed because I can’t replicate the scenario

Note:
This version does *not* fix the settings screen crash which some of you are experiencing. I've had no luck with this crash yet, but I’m still trying to replicate and fix it.

• New feature - Add due dates, without a time. Tap on a selected date to remove or add the time component. You can also toggle by swiping down on the time & date controls.
• New feature - Location reminders. Predefine common locations in settings, then you can add them to a reminder in a couple of taps. 2 locations are available for free. 3 more are available via an IAP.
• Visual updates - Colour is no longer used everywhere. Instead it now highlights selected attributes of the reminder you're about to add.
• Transition animations are now more fluid and quick.
• Fixed keyboard shortcuts for switching lists and cycling priority by including option as an additional modifier now. Remember, you can hold cmd in the app to check the keyboard shortcuts that are available.
• Fixed a bug where buying an IAP could show the wrong confirmation message.
• Improved tap targets when choosing a list.

Remind Me Faster 3.2 just brings a few small tweaks to improve how the app behaves in iOS 15.
• Sometimes launching the app in iOS 15 takes a few seconds to fetch reminder lists and causes a visual delay. I haven’t yet managed to eliminate this delay, but it should feel a bit faster and smoother now.
• Fixed the layout in the settings screen.
• Made some further under-the-hood optimisations for iOS 15.
• The custom App Icons feature should no longer show on Apple Silicon Macs (because it doesn’t work on Macs).