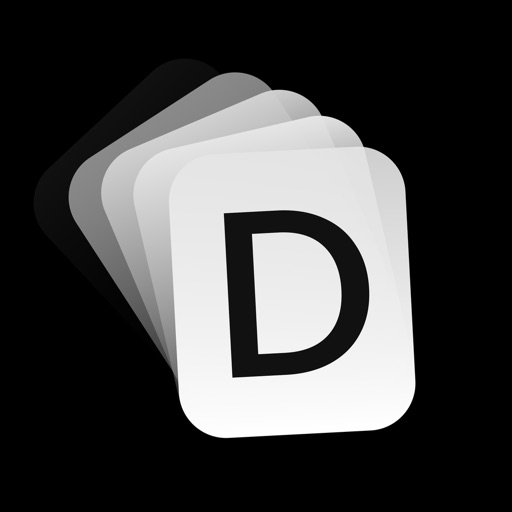 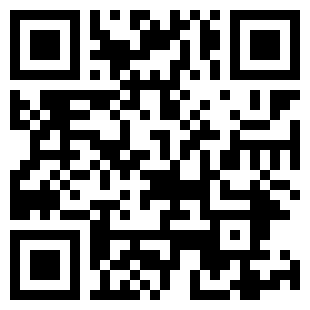 Hi everyone, hope you are doing great. With our first release, we got good feedback from our users. Along with the feedbacks we got some Bug fixes as well as feature support. So we have tried our best to make Dock! more seamless and user-friendly with this particular release.

While developing this version our focus was to help users to use Dock! more seamlessly in their day-to-day life at the same time to help them import their pre-written data to Dock!.

- Atelier: Atelier an intelligent way to convert your Docks to PDF. Atelier supports a variety of customizations for the pdf(Footer, Completed Task, Incomplete Task). Now share your Dock with others using Atelier.

- Smart Reminder: The all-new smart reminder provides users a custom UI with shortcuts using which adding alerts are made easier than ever.

- Smart Bullets: Bullet support was the most asked feature by our users. We have now added the support for bullets on Dock!. Not only that now users can select their favorite bullet among the variety of options available.

- Dock Calibration: Calibrate(Sort) Docks according to your preference among the variety of options provided.

- iCloud Sync: With this version, we have provided you an option to force sync iCloud. Now no more wait for auto-syncing.

- Dock Symbols: Dock symbols got completely revamped. We have added various new Symbols which can highly match with your Dock title(Some of your Dock symbols might not be available now, however still you can use them).

Bug Fixes:
- There was a bug related to reminders that didn't allow notifications to be delivered on time, We have solved it.

- In the reminders section users were able to set reminders for dates that are no more available. We have fixed it, now users can add reminders for upcoming dates only.

- While adding a reminder users were not getting the body content in the notification, we have fixed that.

- We have added an activity indicator for the OCR text recognition process so that users can know the processing is going on.

- Settings screen and its components got a completely new design structure.

- Search bar for Dock items had few bugs which made users show only the searched items even after the search bar is cleared, we have fixed it now on clearing the search bar all the existing items will be shown.

Thanks a lot from the team of Dock! to all the users out there who helped us with their valuable suggestions and feedbacks. Hope so you would like this release. If you have any suggestions or feedback you can contact us at goklnair.2001@gmail.com. 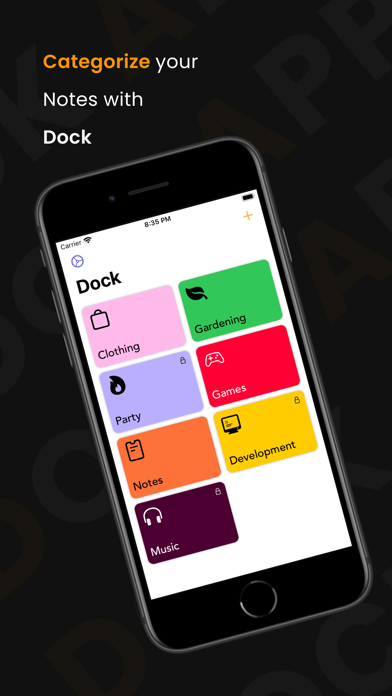 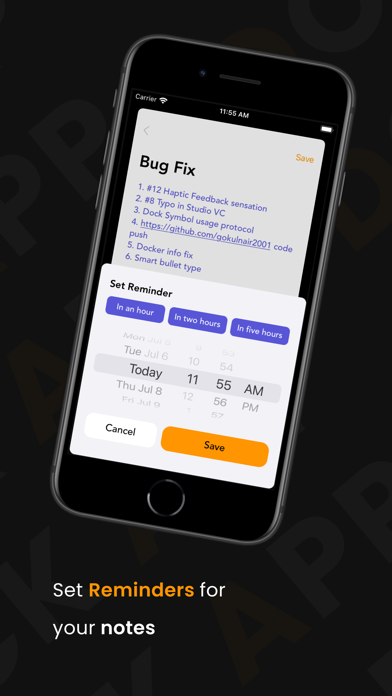 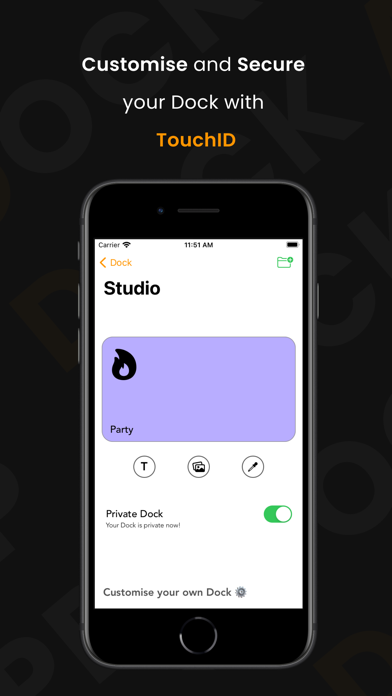 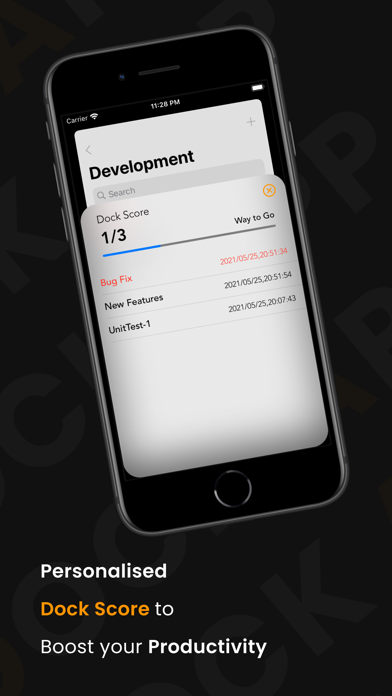 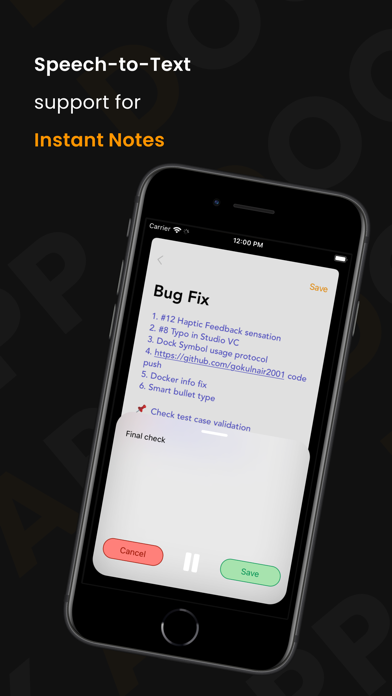 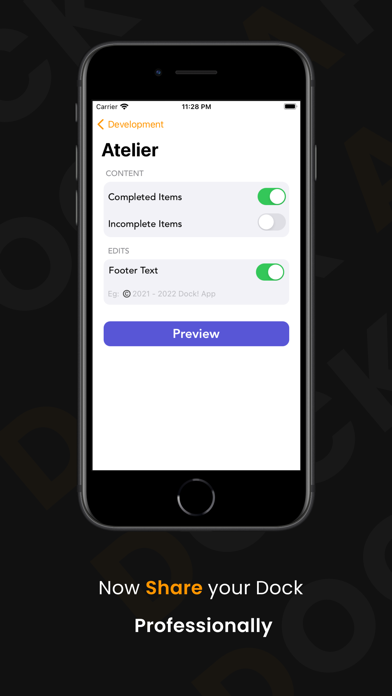 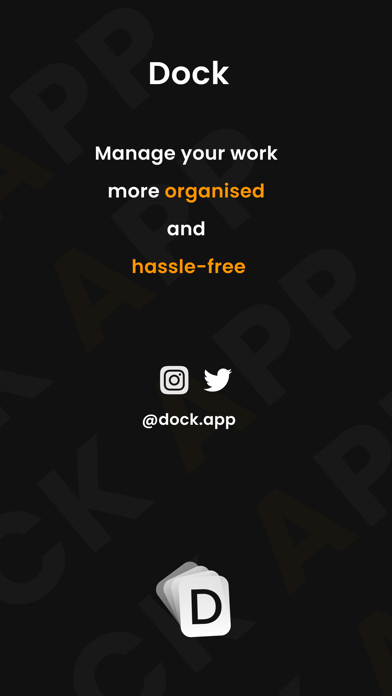 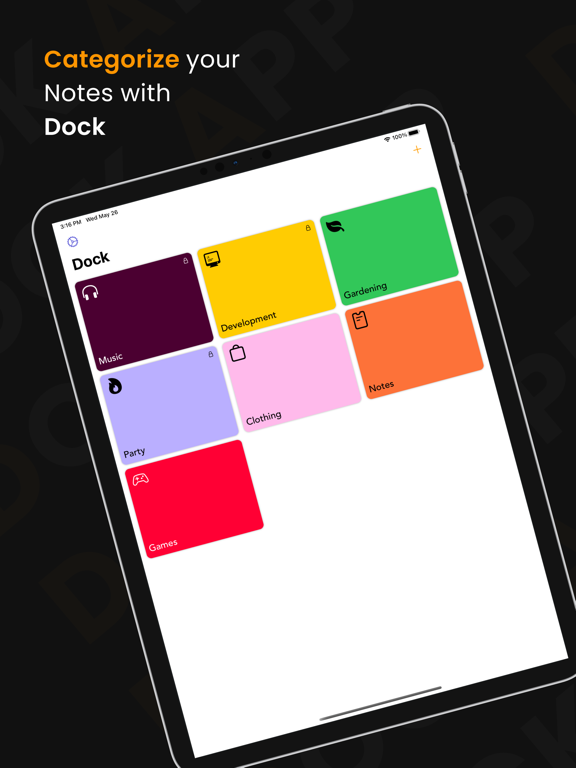 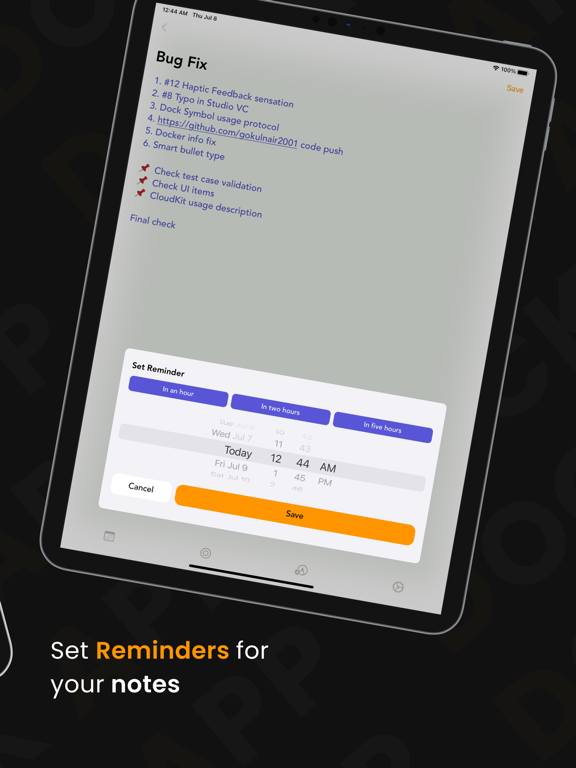 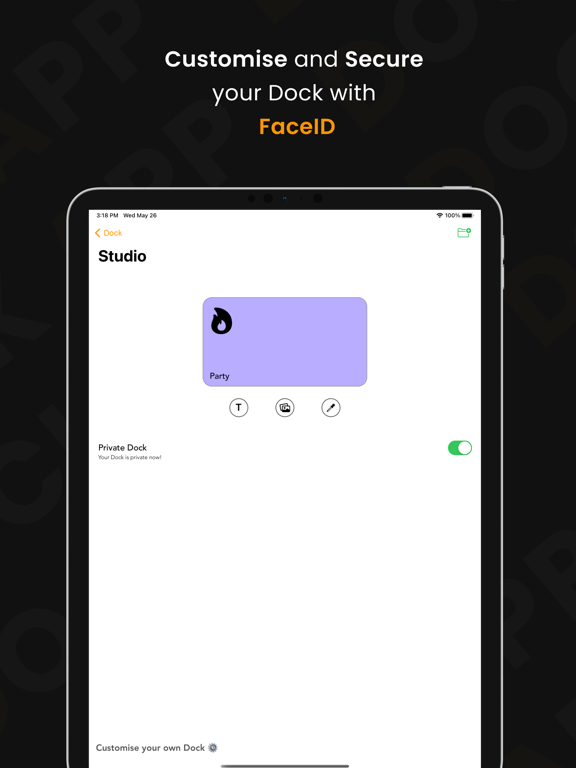 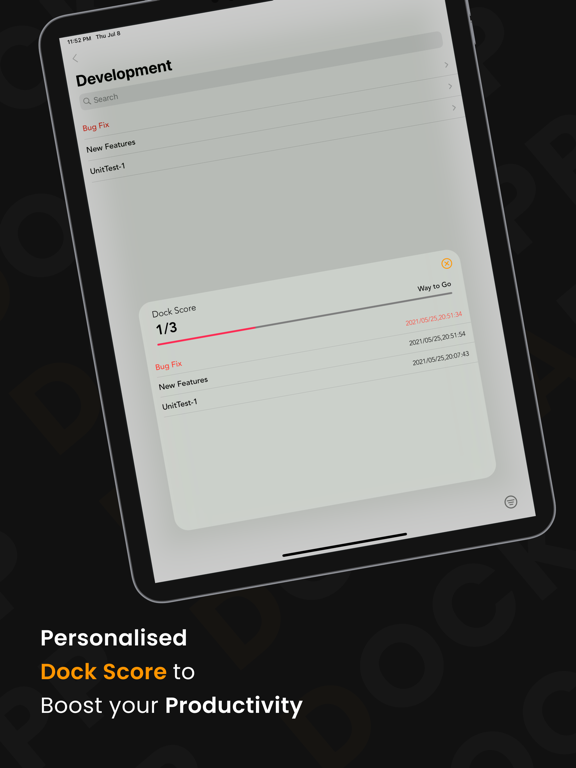 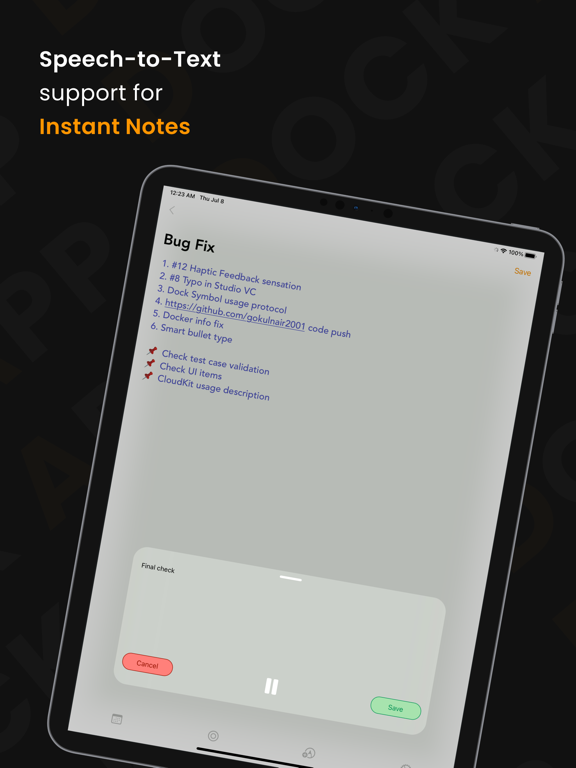 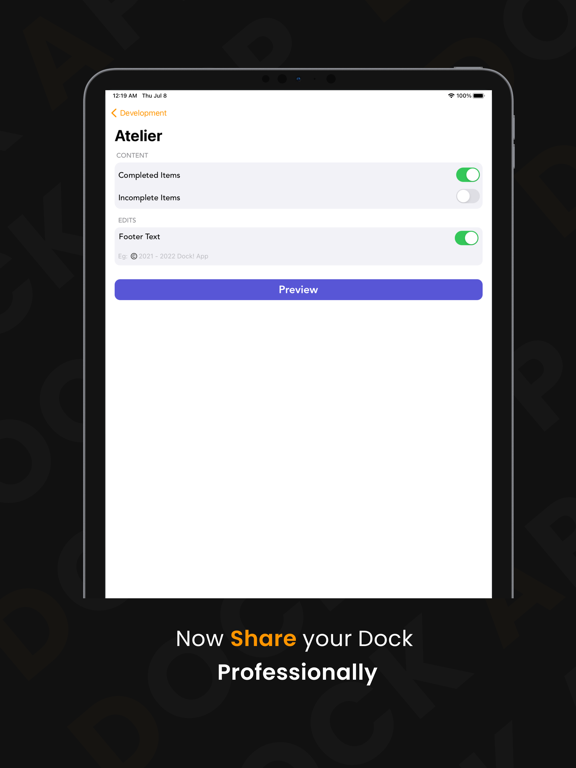 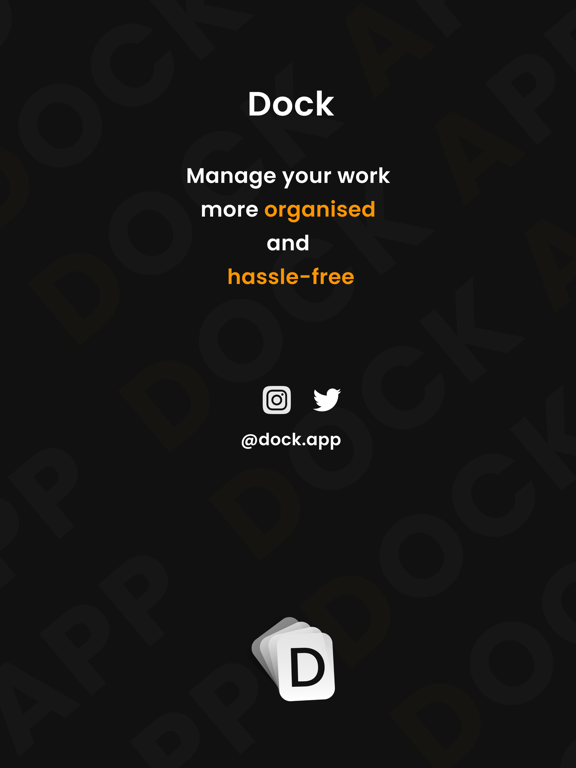 Dock! is a workflow management app that helps you to manage your work more organized and hassle freeway. Dock! is an all-in-one app using which you can add Reminders, Notes, and Todos too.

With the launch of Dock, we bring you a new concept called Dock Category. So basically now you can distribute your work into various categories. These categories are called Dock. For adding every note/reminder you need a Dock. The best part is you can design your own Dock. Every Dock can be protected using your device's local authentication.

You can add unlimited notes/reminders/items on Dock. Once you have completed an item you can delete it or mark it as complete. Dock provides you personalized score in order to boost productivity.

While adding Dock Item we have provided multiple tools. Now you can add your Dock Item using Voice Recognition, Dock Scanner, or through an image.

The best part is Dock! supports iCloud Sync, so that you always be in your ecosystem. Make sure you turn on the iCloud support for Dock! from your Device settings.

Other than all these things we have added minor features like Siri support, custom notification sound and etc. What are you waiting for, Go download Dock! and enjoy the new world of Note taking.

App's data is regularly updated. Last update: 2023-02-04 10:12 UTC. You can request update below and data for this app should be refreshed in next few hours.