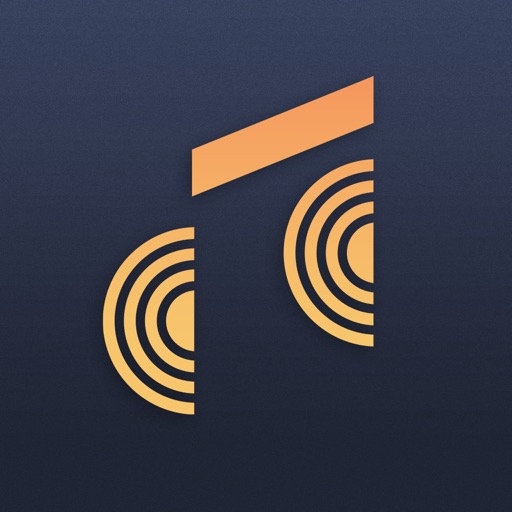 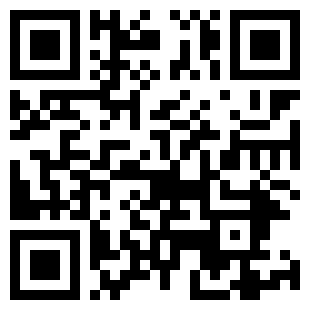 BeatMirror will now retain your target tempo between sessions, whichever way you select it (dragging the button, using the tap pad, etc.). Thanks, Arlene, for catching this!

If you have any questions, comments, or feedback, please feel free to get in touch any time at alex[at]tenkettles[dot]com—happy to hear from you. -Alex 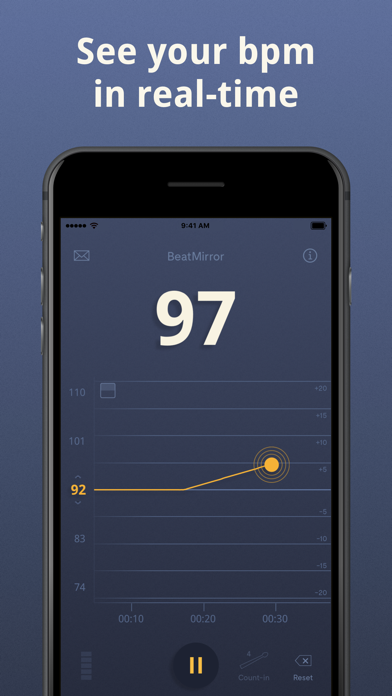 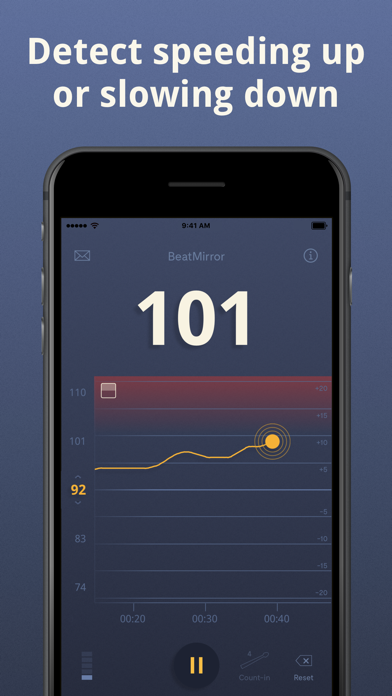 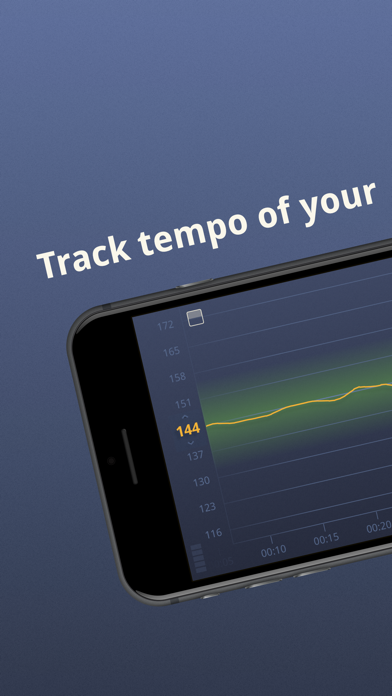 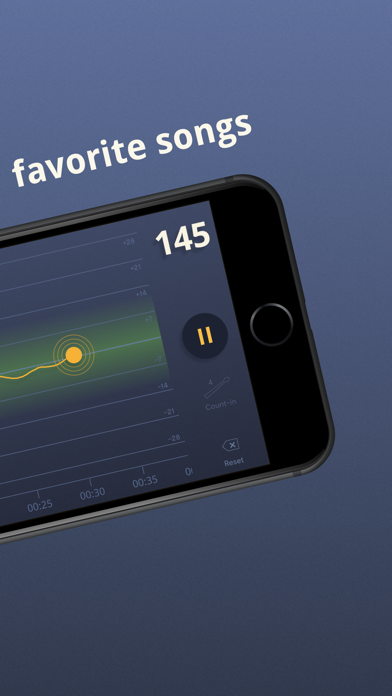 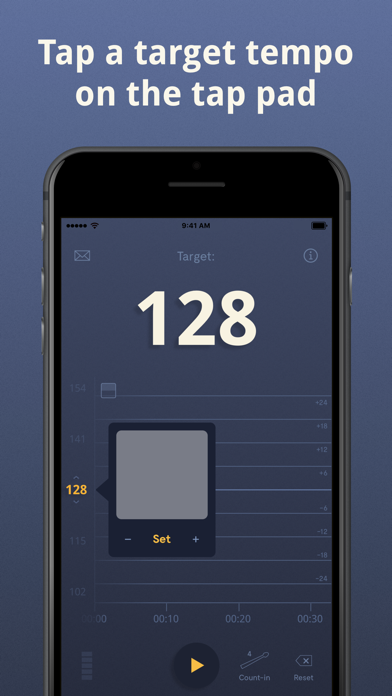 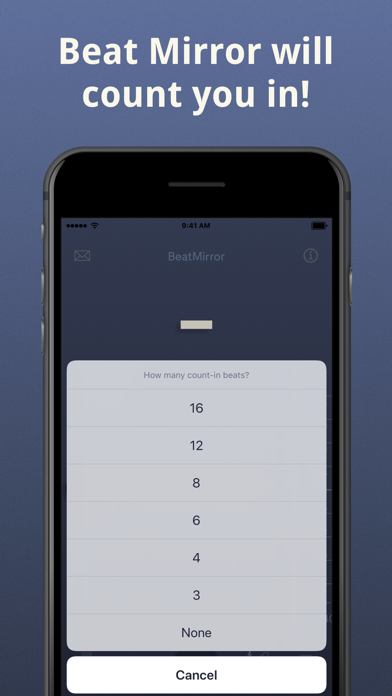 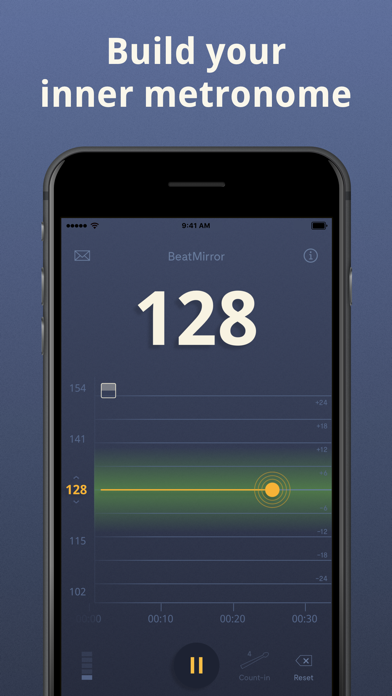 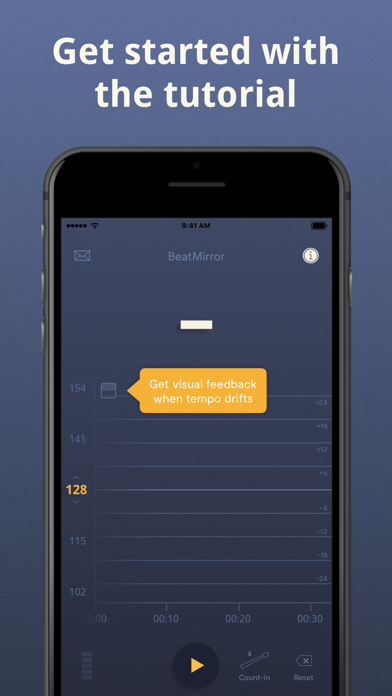 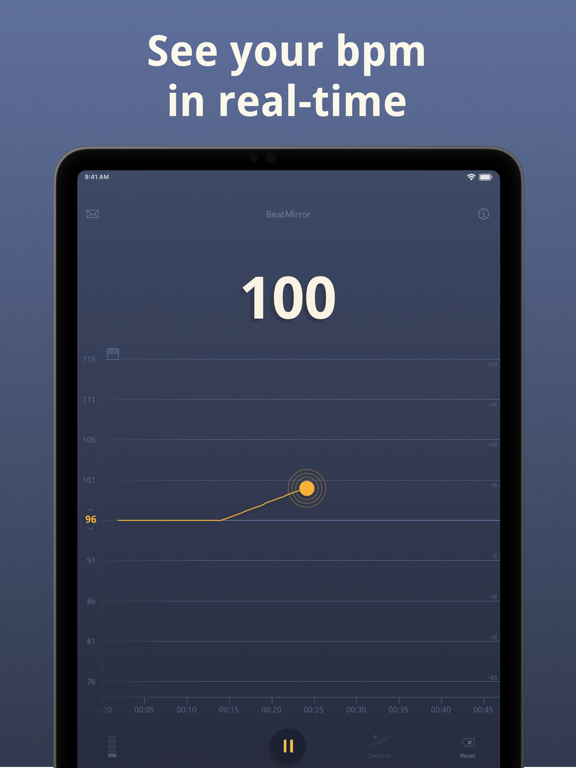 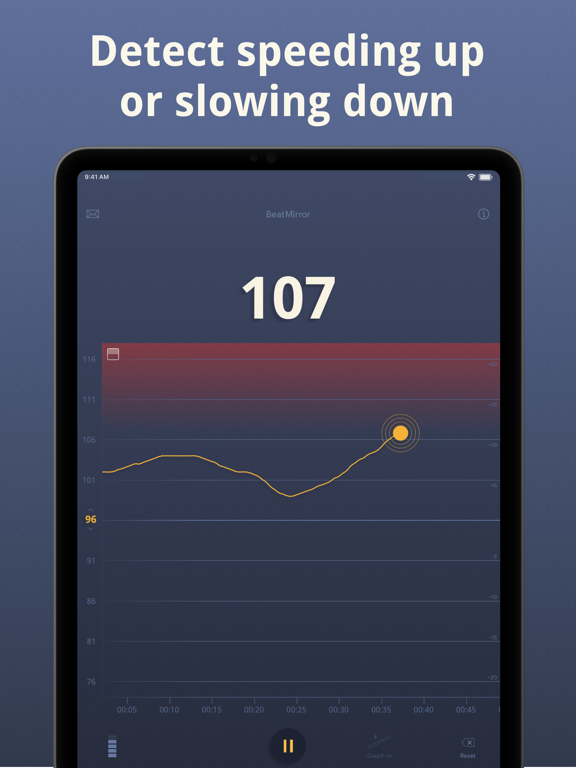 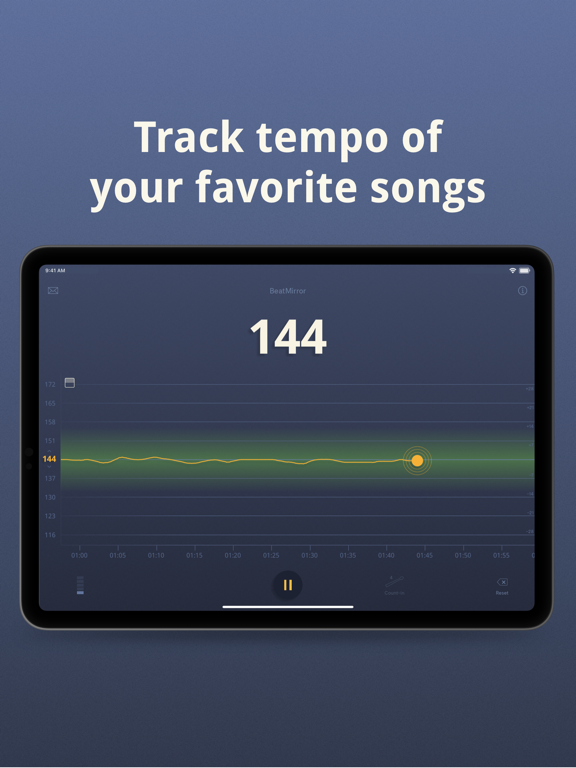 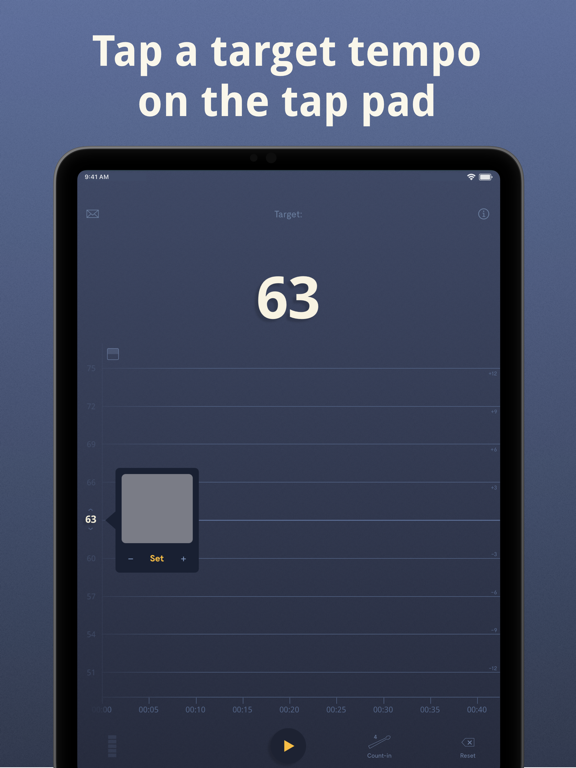 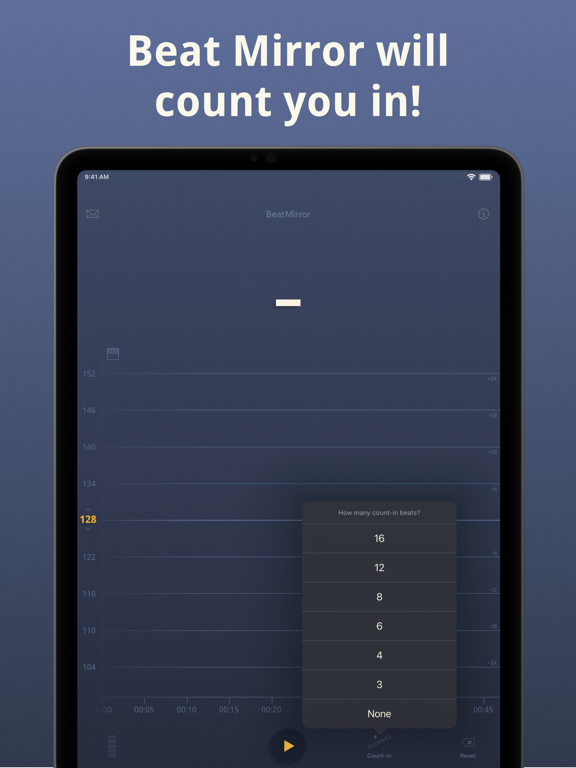 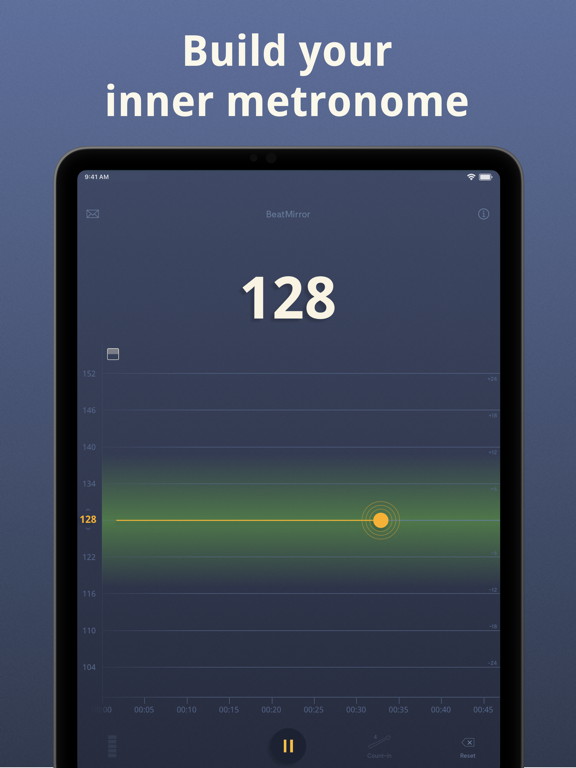 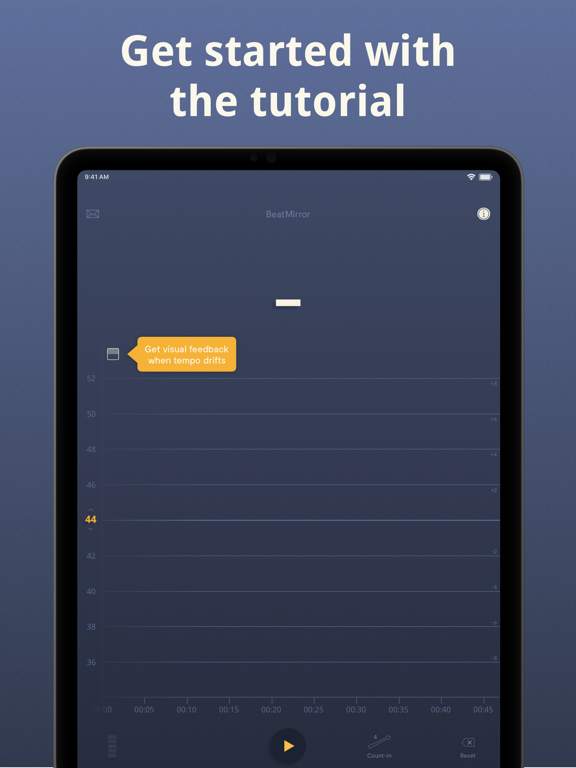 BeatMirror uses your device's built-in microphone to detect musical tempo in real-time. Set a target tempo with the special tap-for-tempo feature and then start the music. A real-time graph of your tempo will appear right away, allowing you to scroll through your tempo history and see trends. Perfect for musicians looking to build their internal rhythm, or to see the tempo of their favorite songs in real-time!

TESTIMONIALS:
"BeatMirror truly is simplicity at its finest. That quality is missing from most apps who try to cram too many features into one app thus making it difficult to use and many times buggy. We feel like your app is VERY good. We're reviewing BeatMirror and it will be a part of the next show. It's got nothing but thumbs up!" - Phil Smith of "Drummer's Weekly Groovecast" (podcast)

"When I first heard about BeatMirror, I was kind of skeptical but after trying it out for weeks now and playing with it everyday, I'm mindblown. Alex really wanted to put a focus on helping drummers improve their internal clock and I really think he's done so." - Richard Ducat of "Drummers I Like" (podcast)

"Overall, this app is so quick and simple to use, there's not really an excuse as to why you wouldn't use it during practice sessions, just to see how you’re improving. If you're a drummer, having an app on your phone or tablet like BeatMirror just makes sense." - Laura Barnes of MI-PRO (mi-pro.co.uk)

FEATURES:
Good music needs good rhythm. But learning to stay on beat—learning to groove—isn't always easy. Build your inner metronome with BeatMirror and catch yourself when you're speeding up or slowing down. Here’s what BeatMirror has to offer:
- Wide tempo range. Tempo detection between 40 bpm and 208 bpm.
- Fast. Detects tempo quickly and accurately.
- Flexible. Accurate across time signatures (e.g., 4/4, 6/8) and rhythm styles (e.g., swing).
- Real-time, scrollable graph. Displays current tempo and tempo history in real-time.
- Easy-to-read interface. Optimized for various light environments, such as stages and practice spaces.
- Tap pad. A special tap pad lets you set a target tempo easily and intuitively.
- Visual feedback. If you drift from your target tempo, BeatMirror shows a red (slow down!), blue (speed up!), or green (perfect!) indicator.
- Custom count-in. BeatMirror gives you an optional count-in before you start playing.
- Versatile. Perfect for solo practice, band rehearsals, recorded music, and you can even use it at concerts!
- Tutorial. An in-app tutorial gets you up and running in a flash.

TIPS FOR BEST PERFORMANCE:
- Avoid handling your device during tempo measurement.
- Be mindful of competing noise near the device's microphone (e.g., conversation, typing).
- Unplug any headphones with a built-in microphone.

NOTES ON USAGE:
- "Target Tempo." BeatMirror is aimed at musicians and bands looking to build their internal rhythm and musical skills. With that in mind, you are prompted for a "target tempo" (the tempo you're aiming for) prior to tempo detection. To ensure highly accurate results, the detection range is limited to roughly ±20% of your target tempo. (Tempos outside of this range will not be detected.)
- Recorded music. To detect the tempo of recorded music using BeatMirror, follow these steps:
1) Play a song from your favorite music player app using the device speaker (i.e., unplug your headphones). Or, play the song from a different device altogether.
2) Open BeatMirror and set a rough target tempo by tapping along.
3) The song's precise tempo will then be displayed in real-time.

Questions about BeatMirror? Please don't hesitate to get in touch at alex[at]tenkettles[dot]com. Happy practicing! -Alex 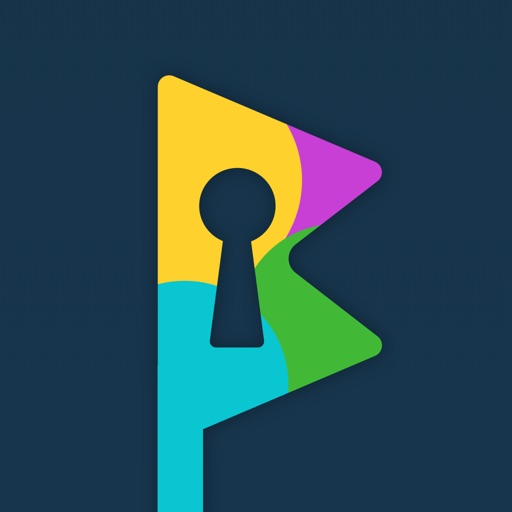 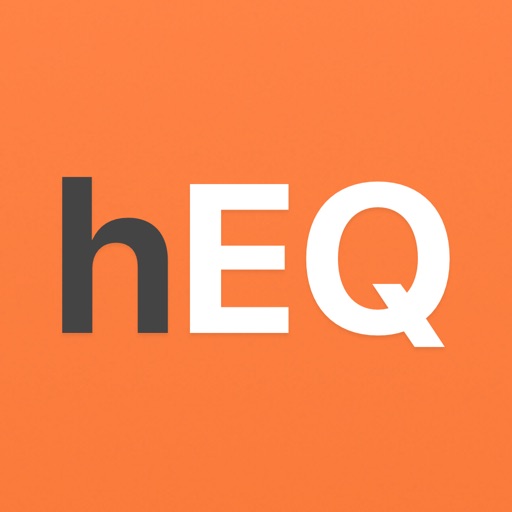 iPhone iPad
App's data is regularly updated. Last update: 2022-07-02 07:12 UTC. You can request update below and data for this app should be refreshed in next few hours.